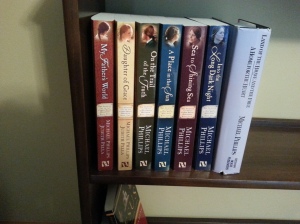 There is a restaurant in my home town that features a bit of an attraction: a fish tank. Inside the fish tank is even a look-alike to one of the characters in Finding Nemo. It seems that every time I go out to eat with friends who have young children, there is always a draw to sit at a table near the fish tank. It’s always entertaining for the kids to watch the fish, and needless to say, it’s a distraction during dinner as well. 🙂
I was reminded of the fish tank at the restaurant when I read a Facebook post from Chuck Swindoll. He recounted that entering into leadership is like diving into a goldfish bowl. He encouraged his followers to imitate Christ because people are always watching, much like a goldfish is often on display for everyone to see inside the tank.
I thought it was ironic that I read this post on Facebook. In many ways, I see my presence on Facebook to be a bit like a fish tank, if you will. It’s a place where I can share my thoughts and feelings, but I must always keep in mind who might be reading or following my posts. From the time I started using Facebook, just under a year after its launch, I made it my goal to never post anything negative or controversial. I wanted those who clicked on my page to be encouraged, supported, and validated. This became even more important to me when I started directing YLF and mentoring teens. I didn’t want to be that person in leadership who gave in to drama and negativity. Even though it was often easy to grumble or complain on Facebook, I refrained because nothing good ever came from it. I would frown when I would read friends’ posts on their own pages; for example:
“Just had the worst day ever.”
“I am so done with people…”
“My parents are driving me crazy.”
Typically, comments below the posts would read something like this:
“Are you okay?”
“Was it me? I’m sorry for whatever I did.”
“I’m sorry. Sometimes people just don’t get it. I’m here for you, friend… even if everyone else is a jerk.”
Needless to say, posts and comments like this never really accomplish anything… except maybe a less-than-stellar representation of character. Exactly three years ago, I found out just how out-of-character it was for me to fall into the trap.
On July 9, 2012, I posted the following to my profile:
“Nothing irritates me more than hearing people demean someone with a disability as if they were somehow less than human. Ugh! I guess I’m in the right line of work, YLF! I stand for you, for us, for all people with disabilities! We can make a difference in this world and no one is going to stand in our way.
*Sorry for the outburst; I just had to put that out there.”
Granted, I was justifiably angry that day. In fact, I thought that going online and venting where no one else really knew the situation was the safe thing to do. At least I hadn’t confronted the person face-to-face for their demeaning comments. And to be fair, I hadn’t called this person out on Facebook for their rudeness. We weren’t friends on Facebook, so I felt safe venting in that way.
But as soon as I posted it, friends began to comment. Most comments were supportive. I found that my statement resonated with many people, especially my contacts from camp. But what made me sad was that some questioned if I was okay or I needed to talk. It seemed my negative post was out of character for my typical posts, and suddenly I realized that I had done just what I vowed never to do.
Facebook was my fish bowl; I was on display for all to see, and I messed up. I may have made a worthy point with my words, but they didn’t come from a place of encouragement; instead, they came from an angry and vengeful heart.
I learned my lesson, and although I’ve come close to being negative on Facebook over the years, I have checked myself before I post. I consider my words before I share them, and I make sure they are edifying instead of self-supporting.
But in leadership, the fish bowl experience doesn’t only exist on Facebook. For me, it takes place on the stage on Sunday mornings, in conference rooms during board meetings, in classrooms and dorm rooms at camp, over the phone and email. It isn’t that I need to strive for perfection, but I need to be aware that people are watching for my reactions. They are looking to me for much more than example; they might even be waiting to see if I might slip up and perform out-of-character.
Particularly as a follower of Christ, I feel a need to portray Christ in everything I do and say. For those who don’t believe or profess Christ, I feel an even greater desire to mirror Him as I interact with others. It saddens me when Christians are often labeled as hypocrites; we say one thing and do another. I know that I might mess up and someone will turn away, but to the best of my ability, I want to strive to be like that fish tank at the restaurant. Whether someone is a believer or not, I pray that they would want to gravitate toward me… not for who I am but because of Who lives within me.