It all started on the first Friday in May. I was heading into a weekend off, and I wanted to make the most of every moment. I knew what awaited me on the horizon: four Sundays in a row of leading worship and I was tired just thinking about it.

Now, don’t get me wrong; I love leading worship. But typically, I don’t lead four weeks in a row. We have teams that rotate, and that usually means I play two or three in a row and then have two Sundays free. I attend church even when I am not scheduled to play, so it’s not like I jet off to some exotic location. Even my off-Sundays are not truly a break. There’s still some element of responsibility that hangs over me and I can’t fully relax.

On that first Friday in May, I decided it was time to shake it up. I got on my tricycle and took off for downtown. It was Cinco de Mayo, and I felt there was no better option than to indulge in some Mexican food. While I enjoyed my dinner, I took in Open Mic Night. I have performed at the monthly event in the past, but that night, I had no desire to get up on stage. I sat quietly in the back corner, not exactly hiding but not exactly wanting to be noticed either. A gentleman got up on stage with his guitar and started to sing, his mellow, bluegrass vibe totally fitting my mood. I sipped my drink and drank it all in. This was really nice. Why hadn’t I done this sooner?

The answer to the silent question was obvious. This was out of my routine. This was only my second time at Open Mic within the past year, and although I was enjoying myself, I also felt a semblance of discontent. I became increasingly uncomfortable when the gentleman playing the guitar ended his set. A girl in the audience called out to him: “Do you know any churchy songs?” she asked.

“What do you mean by churchy?” he responded, flipping through his folder of music.

“Songs you’d sing at church,” she explained. She proceeded to list off a few titles, all of which I knew well; they were songs we sang at church quite frequently.

The man behind the guitar played a few hymns then, and the crowd began to sing along. It was refreshing to be sitting in the Mexican restaurant and listening to the patrons singing praises to God. Eventually, the guitarist ran out of “churchy” songs he knew how to play, but the same girl from the crowd kept calling out song titles, in particular one song she really wanted him to play.

I felt the Holy Spirit nudge me then. I knew the song she was requesting. I could get up there and play it, or I could let this impromptu praise and worship segment come to an abrupt end. I hesitated only a few more moments before I stood to my feet and came out of my safe corner.

“Um… I can play that song,” I said, my voice coming out a bit shakily. What was I doing? This wasn’t a part of the plan; I was supposed to stay in my corner and just observe. But there I was, walking up to the stage.

So I played that night at Open Mic Night. It was out-of-the-norm and a little scary. I may have played music for most of my life and have been a worship leader for almost six years now, but sometimes, the nerves do not go away. The whole ordeal had me completely exhausted, so I came straight home and got ready for bed.

When I woke up the next morning, I slipped right back into my routine. I made breakfast, spent time doing my devotions, and then put in my ear buds. I proceeded to spend the afternoon listening to new music and taking down notes in preparation for the next four weeks. Unbeknownst to me, there was a commotion outside my house. The doorbell rang twice, but I didn’t hear it. 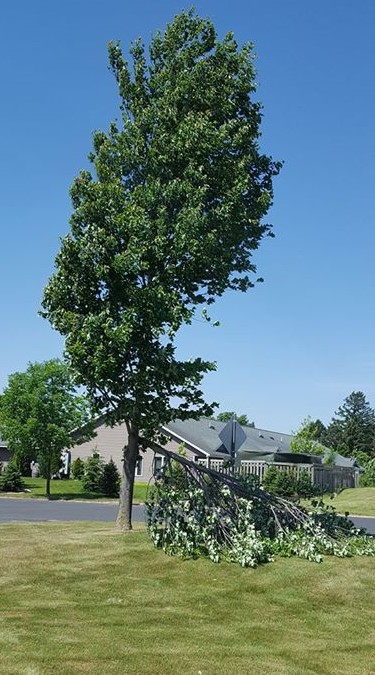 Long story short, sometime after my return home the night before, the wind had come up, but I had been too tired to take much notice of it. The wind must have been strong enough to take down a large tree limb. While I was oblivious to the world with my ear buds in, my uncle came to load up the debris. I didn’t even know about the tree until my neighbor called an hour later to tell me what she had seen. Once I knew about the tree, I thought nothing more of it.

I was on the other side of my four-in-a-row, and I was tired. For the first time in five weeks, I was on the fringes of another weekend off… finally! It had been a good stretch of making music. We had introduced a few new songs and arrangements to the congregation. I had even gotten up the courage to return to Open Mic Night to premiere a brand new song that I had written. But even in the midst of these moments of creativity, I was very much driven by schedule and routine. There were rehearsals, appointments, phone calls, and mounds of paperwork. I was processing some personal challenges in addition to the load at the office, and I was just steadily plugging away at the demands.

So five weeks after the tree incident, I was out on my bike, coming home after a run to the farmer’s market. It was extremely windy, the breeze so strong that dust flew up into my face as I coasted downhill. The air was hot and dry. If you can imagine spinning straight into a giant hair dryer, you can maybe picture what it was like. As I pulled into my driveway, the sight that greeted me literally caused me to groan out loud. “Oh, no…”

My lopsided tree was definitely compromised now. Another large limb, this one larger than the last split, was sprawled out beside the obviously decayed tree. Now what? Who was I going to find to haul this thing away on a Saturday morning, not to mention a Saturday morning in the midst of our town’s summer festival?

A few phone calls later, and a plan was set in motion. But my Saturday morning— my nice day off to spend at the parade with my grandma— was a bit off-kilter now. Fortunately, I didn’t plan on much structure for the weekend. After attending the parade, I planned to spend the remainder of the day reading and watching movies. The temperature outside soared into the nineties, and humidity began to creep in as well. After sunset, I grabbed up my flashlight and phone and walked up the street to the community center where I would be able to see the fireworks display.

I knew right then that this weekend was more than just a weekend off. It was a means to shatter my stale, old routine. As the colors exploded into the sky, I thrilled at the display. This was so unlike our small town. Fireworks only happened once a year, and it was something I didn’t like to miss. Fireworks, like lightning, sunrises, sunsets, and the full moon are things I can actually see fairly well. I was going to take full advantage of this out-of-the-ordinary moment in time.

The next morning, I made the decision to attend church with someone very dear to me. The plans were set, and I was going to be picked up at my house at 9:00 a.m. But then, the tornado siren sounded at 8:50 and it was decision time. Do we go to church and risk the vehicle being damaged by hail or do we play it safe and keep it locked up in the garage? But the church has a basement; our homes do not have underground shelter. At home, we would be alone and isolated; at church, we would be surrounded by friends.

In the end, we made the decision to go. So moments after the siren sounded, we were down the driveway and off to church. It was a little nerve-wracking making our way up to the sanctuary. The stained-glass windows didn’t afford much of a view toward the outside world. It was growing darker by the minute, and the occasional vivid lightning strike would be visible now and then. There was thunder too, and it rumbled and vibrated through the building.

As the pastor called us to worship, he welcomed us to the desert— yes, the desert— even on this stormy morning. He explained that we would be examining the Scriptures concerning the forty days in which Jesus was tempted in the desert. So there we were, lifting our praises, considering the hot, dry desert, and all the while, a violent storm raged outside.

The storm was loud but not so loud that I wasn’t able to focus in worship. Little by little, the nerves and worry brought on by the storm began to fade, and I fully engaged in the music swelling around me. A teenage girl stood behind the guitar, and her tender, lilting vocals drew me in. So this was what it was like to let go— to let another lead me in worship. This seventeen-year-old did more than just sing songs from the stage; she brought me into the Presence of the Holy Spirit. I sang with abandon, and I found such freedom as I raised my voice with the others. We sang “Holy Spirit,” “How Great is our God,” and “How Great Thou Art” as the storm raged on, and I felt something inside me giving way.

It was like the tree outside my house. It took two wind events to bring down its limbs, but in the end, it came down. It had taken me a few attempts to break out of my routine, but in time, I had embraced Open Mic, completed a new song, and found freedom in letting go, little by little. Sometimes, change comes blowing in with the blast of one powerful gust, but more often, change comes after several gentle nudges.

The storm outside was loud and scary, but inside that sanctuary, it was warm, dry, and bright. God used the voice of that beautiful teenage girl to bring new life to my bogged down, dry, and thirsty soul. My everyday routine had driven me to a place where everything was mundane and typical, but it wasn’t until the tree came crashing down and the storm blew in that I began to realize that I needed to wake up. The wind came rushing in, and with it came the knowledge that everything had changed.

Five weeks, a tree twice broken, and one heart renewed…