“So you’re off to camp again, huh?” numerous people asked me as I got ready to leave for yet another action-packed week at YLF.
I would say “yes” or nod my head, which would then lead to another question.
“How long are you going to keep doing this?
“Not too much longer,” I would say. “I’m training in a new director, and she’ll be working as my assistant this year.”
Some of my readers may be aware that each summer, I direct a camp for high school students with disabilities, and the way in which I became the director happened rather unexpectedly. In a way, I was thrown into leading the organization, not fully ready for the challenges that waited for me on the horizon. Although it was often difficult, I kept striving forward until I finally reached sort of a calm consistency in my leadership. In terms of riding a bike, I was coasting.
But as this summer came around, I began to feel restless. I had turned over some of the planning to our board, and although I had less to do, I was a bit stressed as I wondered if the work was actually getting done. But where I didn’t stress was with my director-to-be, this summer’s assistant. Although young and rather inexperienced, she reminded me of myself when I first started off as assistant director. I was an enthusiastic 26-year-old who just wanted to see YLF succeed. Although only 21, my assistant director held so much promise for the future of our camp. She was eager, driven, compassionate toward the students and staff, and well-rounded socially. She had room to grow in certain areas, but I had every confidence that she would succeed.
As our week at camp progressed, I watched my assistant director bloom. It was like watching a theater play in rehearsal. At first, the scenes don’t flow together and seem disjointed with the lack of practice, but little by little, everything starts to come together and a play has its opening night. As I carefully guided her through the process of directing, I saw how my assistant began to make her own decisions about our camp. She started to find the balance between seeing me as the director with authority and recognizing herself as the one who would soon be taking the baton.
As I watched her spread her wings, I thought of my early days as director. I didn’t have much guidance during that season, and I had to figure a lot of it out on my own. I didn’t want my assistant to feel that kind of stress and panic, so I sought to make her transition as seamless as possible. I also wanted to portray to her my faith and the way in which I had survived those early days.
In a heartfelt conversation our last night at camp, my assistant thanked me for giving her the opportunity to direct and she referenced my closeness to God as an inspiration to her. Although I was saddened at transitioning out of YLF, my heart became lighter at her words. I had done my best to live out my relationship with Christ in my work at YLF, and I was overjoyed to see that it had made an impact.
As I literally handed over the baton of leadership at our final graduation ceremony this summer, I did so with tears streaming down my face. It wasn’t because I was sad to leave; it was because I was honored to embrace the future. It was time for me to bow out and give the spotlight to someone else. In that moment, I once more gave my life’s goals and ambitions over to God, for He has and always will be my leader… the One in the spotlight. True, I will be back at camp next summer to shadow the new director and make sure she has everything she needs, but in official terms, I am no longer director.
It’s like the quote I read on Facebook not too long ago. My role at YLF with the assistant director is a mirrored example of my relationship with Christ. I would like to close with these words from an anonymous source.
“If the world is a stage, and we are actors in a play… acknowledging that God will always have the leading role and the spotlight, then it seems to me that what determines if I play a supporting role or just a cameo is my closeness to Him.”

Late this past Spring, I came home from work one day to encounter a strange stench in the air. It smelled as if a motorized vehicle was leaking gasoline and then burned the fuel in the process. The smoky stink was enough to make me crinkle my nose and hold my breath. I closed all of the windows and cranked up my air conditioner. It wasn’t long before things smelled normal again.
A few hours later, my grandmother called and I went to the door to meet her as she dropped something off.
“What happened there?” she asked as she pointed to a spot just outside of my bedroom window.
I turned to see a charred mass of metal and rubber.
“What is that?” I asked.
“I don’t know,” she responded. “But it looks a lot like a lawn tractor. Was there a fire today? Did something happen when they mowed the lawn?”
“I don’t know,” I answered. “I was at work.”
A few hours later, the mystery of what happened was uncovered. I found out that the building manger had just taken a break from moving the lawn and had gone inside to get something to drink when the lawn tractor spontaneously caught fire. Fortunately, he was not on the lawn mower when it burst into flame, but in the end the lawn tractor was a complete loss.
I thought of the ill-fated lawn tractor as I got ready to move a few weeks later. I felt as if I was coming to the end of something; perhaps I felt the change of scenery coming, more independence, and greater opportunity. It was exciting and terrifying all at the same time. Just like the tractor going up in smoke, I felt as if my current way of life had disappeared far too quickly. There was a certain amount of security in living in an apartment. There were always people coming and going, and now I was the one going… leaving for the last time. My departure was happening all too quickly, and like the lawn mower fire, I seemingly had no time to prepare.
But there is something about fire that prepares for new life… like the fertile ground that emerges after a forest fire. New life was coming for me too… new promise on the horizon. There would be a new home where I could soon develop new memories with my friends and family. Yes, things would certainly be different for me and those within my circle. But in time, I would be given potential to flourish. The sudden transition and flare up of the flame of change would bring me new soil of promise and opportunity.
Out of the ashes of the old, I would embrace the newness of change. 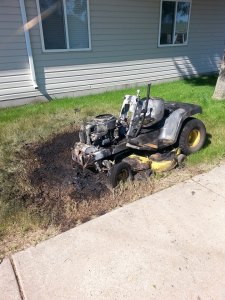